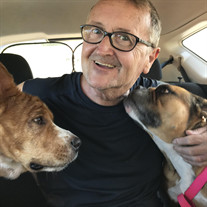 Michael (Mike) Girardot, 68, of Kihei, Maui passed away on June 28, 2021, at home. Mike, known as “Papa Bear,” will be remembered for his love of golf, Indiana University basketball (go Hoosiers!), helping his wife cheer on the New York Yankees, his love of the beach, and taking in the island sunset. Moving to Maui was a lifelong dream, which he spent his final days enjoying. Mike was born November 22, 1952, in Fort Wayne, Indiana. He owned and operated Mike’s Citgo in Monroeville, Indiana, for more than twenty years before becoming a corrections officer at the Allen County Sheriff’s Department. He came to Maui in 2016 with his wife, Laurie, where he spent his days on the golf course, at the beach, or snorkeling at Maluaka Beach. Mike is survived by his wife, Laurie, who he married on December 10, 2013, on Kaanapali Beach; daughter Kelly Robertson and her husband Jason; son Christopher Girardot and his wife Amber; step-daughter Mary Kenney and her husband Jason; and four grandchildren. He is preceded in death by his mother, Janet, and his father, Richard. There will be a private visitation at Nakamura Mortuary in Wailuku on July 6, 2021. Our hearts are full of love and gratitude for our friends and family who have supported us during the last few years. You were never far from Mike’s thoughts, and your kindness will be remembered forever. We would additionally like to thank Hospice Maui (in particular Shannon) and everyone at Hale Makua Wailuku for their care, love, and support. “And He will raise you up on eagles' wings Bear you on the breath of dawn Make you to shine like the sun And hold you in the palm of His hand”

The family of Michael Eugene Girardot created this Life Tributes page to make it easy to share your memories.

Send flowers to the Girardot family.