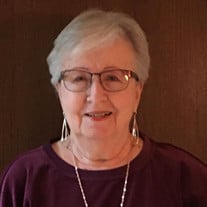 Mary Louise (Hovey) Haines passed away peacefully on January 8, 2021 in Wailuku, Hawaii. She was born on August 26, 1932 in Canton, Ohio to Norman and Elizabeth Hovey. Mary graduated from Washington High School in 1950 and studied voice for one year at The Julliard School in New York City. Mary was involved in music all her life. She sang in her high school choir and was the lead in several operettas. Mary was well known for music programs she sang for various community organizations. She was a soloist for local churches and sang for many years in the choir at St. Paul’s Lutheran Church. After raising her family, she worked in banking at Harter Bank and then at First Savings and Loan in Massillon until her retirement. Mary was active in the Massillon Women’s Club and the Lady Shriners. After her retirement, Mary enjoyed spending her winters in Daytona Beach, Florida and later in Texas and Hawaii with her daughters and their families. Mary loved clothes and shopping and was never seen without matching jewelry and accessories. She was an avid golfer, who enjoyed playing in a summer league with her friends and having a cold beer afterward. She enjoyed monthly luncheons with her high school classmates. She loved doing crossword puzzles, playing solitaire on her phone, and watching Jeopardy. She was also well known for her love of chocolate and ice cream. In her later years Mary became a massage therapist, traveled with family, sang in church choir with Emily in Texas, and studied Ch’an (Zen) Buddhism. Mondays with her sangha became a very special part of her life. Mary will be remembered as a loving wife, mother, stepmother, and grandmother; as a fun and loyal friend; as someone who remained strong and kind in the face of adversity; and as someone who was not afraid to speak her mind. Mary was preceded in death by her husband Leonard W. “Jake” Haines. She is survived by her daughters Emily Putts (James) Maas and Laura Putts (Jack) Morris; stepdaughters Margaret (Dan) Hunt, Julie (Bob) Moorhead, and Molly Haines; granddaughter Mai-Ling Maas; step grandchildren Emily (Jeff) Hunt Bernardi, Jeffrey (Cassandra) Hunt, Alexander (Elizabeth) Hunt, Tyler Hunt, and Anna Moorhead; and seven step great-grandchildren. A memorial service will be held in Canton in the spring. In lieu of flowers, donations may be made to The Zen Society of Cleveland (www.cloudwater.org) or the Maui Dharma Center (www.mauidharmacenter.org).

Mary Louise (Hovey) Haines passed away peacefully on January 8, 2021 in Wailuku, Hawaii. She was born on August 26, 1932 in Canton, Ohio to Norman and Elizabeth Hovey. Mary graduated from Washington High School in 1950 and studied voice for... View Obituary & Service Information

The family of Mary Louise Haines created this Life Tributes page to make it easy to share your memories.

Send flowers to the Haines family.