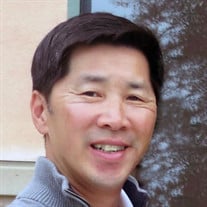 Howard Chee Hoo of Mountain View, CA, expert in working smart but not hard, master of afternoon naps, connoisseur of hot peppers and desserts, died Friday, July 30 on the island of Maui. He was 57. Born July 14, 1964 in Hong Kong to the late Lum Kie Hoo and Sau Hing Lee who both worked multiple jobs at times as tailors and cooks, he was the youngest of three boys. After immigrating as a young child to Honolulu where he first learned English, his family eventually settled into their first home in East San Jose, the storied “bowling ball” house. There he learned to play “kick-the-can”, became a skilled slingshot marksman, acquired underage driving skills, took advantage of many school sports opportunities (including track, cross country, football, wrestling, basketball, and soccer at Quimby Oak Jr. High and Silver Creek High School), and developed lifelong friendships. Thanks to his math teacher, he gained a skill and love for the subject that earned him recognition on an airline flight when he correctly solved an equation posed by the pilot. He took his education pursuits seriously, attending college classes in the afternoon then working the night shift at Gemco, thus turning him into a forever night owl and late riser. He graduated from San Jose State thankfully with a minor in Math and a B.S. in Industrial Technology, as he never received any royalties from popularizing the selfie-stick. The pay from his first jobs allowed him to experiment with hair (perming) and clothing trends (think Miami Vice television series), to purchase his first love, a 1990 Nissan 300ZX Twin Turbo, and to become a first-time homeowner. Always responsible but never too serious, he maintained his composure while still enjoying a good prank; he thought before he spoke but had a quick wit; he was the designated driver yet still managed to have the best time drinking his favorite soda, Squirt. He met his wife on a blind date and was unphased after she declined an offer to drive to Tahoe that very same night. It was his beautiful blend of maturity, swagger and gentle nature that made Howard easy to love. And as responsibilities grew through family illnesses, aging parents and becoming a parent himself, he was nevertheless able to maintain a simple outlook on life. During this time, he taught himself golf and grew to love the game, always working to improve it through watching YouTube tutorials and reviewing videos of his swing. Golf was just one of the many activities he enjoyed along with fishing, skiing, mountain biking, snorkeling, zip-lining and most recently roller blading with their dog, Pepper, whom Howard considered to be a sled dog in training (much to his wife’s consternation). He was a dedicated, supportive and nurturing father from coaching his daughter’s relay and soccer teams, fostering baby chicks and raising monarch butterflies to being the parent chaperone and driver, bike repairman, spider-capturer, smoothie-maker, and her biggest ballet fan. Always agreeable, never one to argue, Howard supported his wife in many ways by cooking her favorite foods (including his specialties, “No-Hoo’s Miso Marinated Black Cod'' and Korean BBQ), developing an appreciation of musical theatre and volunteering alongside her. He was also the family’s in-house IT support, spared his wife from anxiety-inducing Costco shopping trips, and understood the importance of being a role model both as a partner-in-life and as a confidence-building father. Howard is survived by his wife of 22 years, Emily Jee, his daughter Charlotte, his brother Bryan and his loving in-laws, nieces, nephews, cousins and a host of long-time friends. He is preceded in death by his father Lum Kie Hoo, mother Sau Hing Lee and brother Lawrence Hoo. In lieu of flowers, the family asks that memories and photos be shared onto Nakamura Mortuary’s obituary website which will be forever cherished.

Howard Chee Hoo of Mountain View, CA, expert in working smart but not hard, master of afternoon naps, connoisseur of hot peppers and desserts, died Friday, July 30 on the island of Maui. He was 57. Born July 14, 1964 in Hong Kong to the late... View Obituary & Service Information

The family of Howard Chee Hoo created this Life Tributes page to make it easy to share your memories.

Send flowers to the Hoo family.